Q and A with Carolyn 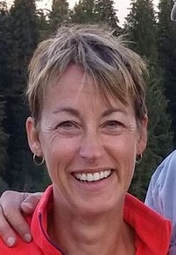 Have you always wanted to be a writer?
Yes. And no. I’ve always loved books and have been an avid, and eclectic, fiction reader my whole life. My first foray into writing a novel was at the age of fifteen, when I decided that whipping out a Harlequin Romance would be both easy and fun. It wasn’t either. I quickly realized that to write a novel you have to love the story and characters you are creating because you’re going to be inhabiting that world for many, many hours. When it came down to it, I had neither the dedication nor the true desire to write the book I had started and I abandoned the effort some thirty pages in.

In high school and college I took creative writing classes which I thoroughly enjoyed, but, deciding writing was not a practical major, I ended up studying psychology, and, later, City Planning. For many years, the only non-professional writing I did was in journals and that was really more about working through current life challenges than creative output. I still liked the idea of writing, but at that point it wasn’t really one of my ambitions.

In 2007, now with two kids and two decades working in the field of affordable housing, the writing itch started pricking me again. I took a couple of classes on line, then started writing around the edges of a story I’d had running through my head for many years. I worked on that book, an epic fantasy, for about five years, including two years of an MFA program. The book is unlikely ever to live on the printed page, but through it I learned a ton about plotting and character development and all the frustrations and pleasures of corralling words into a narrative. When I finally finished it, I moved on to the book which eventually became Rewind.

How did you come up with the idea of freezing time?
I first imagined freezing time when I was a kid. At the time, I didn’t picture it having any down sides or personal costs, I just thought about how cool it would be to stop time. I was a shy kid and so I figured freezing time would allow me a pause to become un-tongue-tied, or to let a flaming blush fade from my cheeks, or to whisk away some pending embarrassment before it could be discovered. I also thought of all the ways I could save myself or others – catching someone before they hit the ground, preventing someone from drowning, walking away from an assailant. In my childhood version I had the power to decide during the freeze if things would go back to the way they were prior to freezing or if the things I changed remained that way afterward. I had a special incantation (let my actions be as done) that determined the fate of the freeze.

What was the hardest part about writing Rewind?
Definitely plotting. I had this concept I loved but no story to go along with it. Eventually I drafted a general outline, but then I’d write a few chapters and, as I fleshed out the story, I’d discover some flaw with my original idea and have to go back and work out ways for it to make sense again. I keep a scratch file where I work through problems, sometimes with long-winded internal arguments and sometimes with bullet points listing potential plot twists and where those might lead.

My original main character was a boy named Jakob and the opening scene was in the common room, where, during frozen time, another character kills Jakob. Chapter 2 then starts exactly the same way as Chapter 1, except Jakob is alive again and events unroll in a different way. The whole book was much darker.
This original version also included a too-complicated plot thread about a mob boss (a woman who is eventually unmasked as being the CIC Director) and shows Jakob committing multiple crimes with his agent.

A lot of the plot changes came from me figuring out what the story was that I wanted to tell. I realized the crime angle bored me, and that what interested me was thinking about how people – both spinners and Norms – would react to someone having this kind of power. I knew I needed some outside threats to move the story along, but the focus to me was always on the characters themselves: their relationships, their reactions, and their choices.

Rewind takes place in Portland, is that where you’re from?
Portland is definitely my home, but it’s not where I’m from. I’m not “from” anywhere. I was born in New Orleans, moved to Panama at two, Honolulu at seven, and New Haven, CT at fourteen. (And no, my parents were not in the military. They’re both academics.) The summer after college, I drove to San Francisco, and for the next eight years lived in various cities around the Bay Area. In 1995, my husband and I moved to Portland. After so many homes, I sometimes can’t believe I’ve lived in one place – and mostly all in the same house! – for this many consecutive years.

When I was writing Rewind, I thought a lot about whether to use a real city or to keep it vague enough it could be happening in Anytown USA. I ended up using Portland because it was fun to play with that specificity. As I’m writing I picture events happening in particular places – or some melded version of a couple of actual places. Having real places in mind makes it all seem that much more real. If you click on this LINK, you can see photographs of some of the places that inspired me!

What’s next for the spinners? Will there be a sequel?
Absolutely! Rewind is the first book in a trilogy. The second book, Unleashed, was published in the fall of 2019. The final book will come out in the spring of 2021. I also have a couple completely different projects in various stages of completion. Now that I’ve finally seen my writing dream turn into reality, I’m excited to keep the momentum alive!