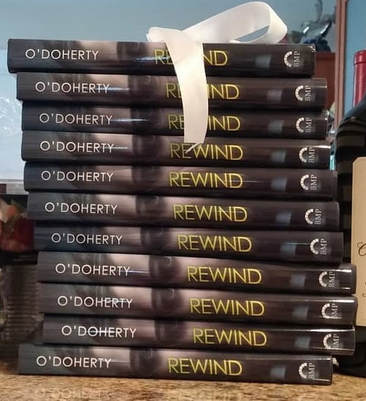 Our car skids to a stop at the police barricade. Ross rolls down the window.

“Agent Carson Ross.” He holds his badge out to the square-faced cop standing guard. “I have a spinner with me.”

The cop peers past Ross to stare at me with that familiar mix of curiosity and distrust. I pick at a ragged edge on my thumbnail. I hate dealing with people who haven’t met a spinner before. They don’t look at me and think: oh, there’s a sixteen-year-old girl, they looked at me and think: ooh, there’s an escaped circus animal. The dangerous kind. That aren’t necessarily fully trained.

The cop hands Ross’s badge back.

“Chief’s waiting for you.”

Ross guns the motor and speeds to the open space in front of City Hall. I brace one hand against the glove box to steady myself. Today is the Friday before Labor Day weekend, and this street should be packed. There should be people juggling briefcases and cups of coffee, cell phones chirping, and exotic scents wafting from colorfully painted food carts. Instead, an unnatural emptiness screams danger, the warning underlined by the police cars barricading both ends of the block. Behind them knots of uniformed men and women huddle, tension emanating from them like a bad smell. The sole person standing on the street is Portland’s chief of police, Lamar Graham.

“Ross.” Chief’s lips part in a sigh of relief. “Thank God you’re here.” He bends lower, eyes skipping past me and into the back seat. “You only brought one?”

“Alex and I were close by when we got the call,” Ross says. “If I’d gone back to the Center it would have taken twenty minutes. Traffic is nuts out there.”

Chief checks his watch. A nerve in his jaw twitches.

Ross climbs from the car. “You called someone from the bomb squad?”

Chief shouts a few words in the direction of the huddled officers. I step into the cool fall air, pretending the word bomb doesn’t faze me. Up close, I can see sweat darkening the fabric under Chief’s arms. My already clenching stomach tightens. Chief wants another spinner here because if two of us work together, we can combine our skills and hold the freeze longer. Now it’s all going to be up to me.

“That’s McDennon,” Chief says, nodding towards a man striding up the sidewalk. “It’s his first freeze.”

McDennon marches up to Chief and salutes. He’s wearing a brutal crew cut and this spotless uniform that makes him look like a character from those Halo video games the other Center kids play, except for the bag he carries – black, lumpy, and with the words BOMB SQUAD etched across it in white letters. My mouth fills with spit and I swallow, hard.

I stretch out my arm, exposing the three-inch-wide metal bracelet clasped tight against my left wrist. It looks like those bands Wonder Woman wears in the old cartoons, except mine is called a leash, it’s stamped with the Center’s logo, and I’m required to wear it whenever I leave the building. Ross pulls a key from his pocket and twists it in the band’s lock. The knot in my stomach loosens. Leashes emit a low-level electromagnetic current that, when pressed against a pulse point, blocks my ability to link with time. The instant it falls away, I relax a little. It’s like inhaling a mouthful of fresh air after being cooped up in a stuffy room.

“You’d better hurry,” Chief says, taking the leash from Ross. He glances at his watch again. It’s a sporty thing and even from four feet away I can read the time: 1:47.

“According to the guy who called it in,” Chief says, “we’re down to 13 minutes before the bomb blows.”

My stomach twists back into a pretzel. If I can’t hold the freeze long enough for McDennon to find the bomb and figure out how to dismantle it, then City Hall is toast. There isn’t time for another spinner to get here and try again.

Chief doesn’t look comforted, but Ross’s faith helps restore some of my confidence. I roll the tension from my shoulders and hold out my hands. Ross grasps my right one and McDennon slides a damp palm around my left. I breathe slowly, the way Ross told me to do when I feel anxious.

I look into his eyes. They’re blue, with flecks of darker color in them, like waves in a picture I once saw of the ocean. I take another breath. Release it.

And then I freeze time.

Everything stops. Sound disappears. The bright September air grows perfectly still. People turn to statues. A clutch of fall leaves, caught in a passing gust of wind, hovers a few inches above the pavement. In the sky over City Hall, a flag hangs in a half-furled wave. Nothing – not a person, insect, machine, or object – moves anywhere in the world.

Nothing, that is, except me and the two people whose skin I’m touching.

McDennon’s hand twitches in mine. He’s gawking at all the strangeness: a squirrel suspended mid-jump between two trees, tail bristled by a breeze that no longer exists; the fact that our shadows won’t follow us since we can’t block an unmoving ray of light; the impossible, absolute silence.

My breathing steadies, its calm no longer forced. The frozen quiet laps me like a warm bath. It’s not just lack of noise, it’s the absence of sound. Pure. Undisturbed. For the first time since I got out of the car, my body fully relaxes. This is my element. A freeze is the one place where I am the one in control. I release the two men’s hands.